The rise and rise of mutual fund industry

The mutual fund industry has been growing at a breakneck pace over the last few years supported by the performance of capital markets, rising awareness among the retail investors and shift in investment pattern from physical assets to financial assets. The AUM (Assets under management) with mutual fund companies increased at a staggering pace of about 25% CAGR during period of 15 years ending March 2018. 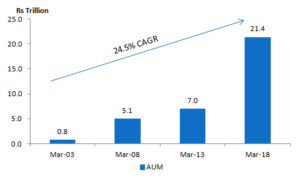 During the last five years, the industry grew at around 15% CAGR adding Rs 14 trillion to the AUM as compared to around Rs 6 trillion in the previous ten years. The low interest rate cycle, robust economic growth as well as performance of capital markets aided this strong performance of mutual AUM. Further, investment through SIP{ (Systematic Investment Plan) also gained traction during the period. 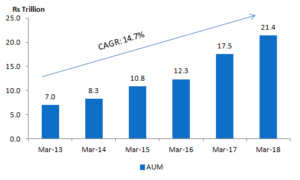 The income fund constitutes around 37% of overall AUM as of March 2018 followed by equity funds with share of around 31%. Despite tax benefits under section 80C, investments in ELSS (Equity-Linked Savings Scheme) funds formed only around 4%. 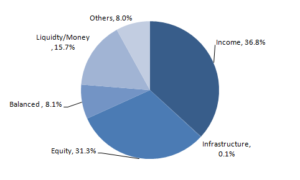 The balanced funds (mix of equity and debt investments) has been the fastest growing segment with around 60% CAGR growth during last five years, followed by 35% CAGR growth for equity funds. On the other hand, Gold ETFs (constituting merely 1% as of March 2018) degrew at 16% CAGR during the period.

Growth Trend for different products during fiscal 2013 to 2018 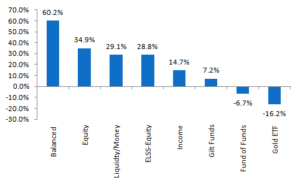 The bullishness about performance of equities can be gauged from the fact that the share of investments in equity mutual funds (of overall AUM)  touched all time high high of 47% in March 2018. This was a sharp increase from 38% in March 2017. 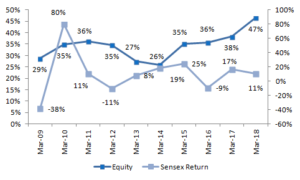 The share of equity investments through mutual fund route (as % of overall market capitalisation) also increased from around 3% in March 2013 to around 7% in March 2018. This suggests increasing number of retail investors looking to invest in equity markets through the mutual fund route. On the other hand, it also suggests the rise in liquidity with the mutual funds which may have also aided the upswing in the markets during the period.

Trend in equity mutual fund investment as % of market capitalisation 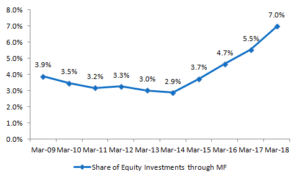 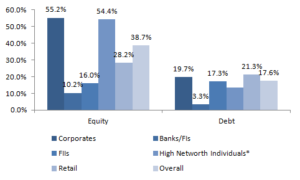 After a period of continous rise due to positive sentiment, inflows likely to remain subdued for rest of fiscal 2019 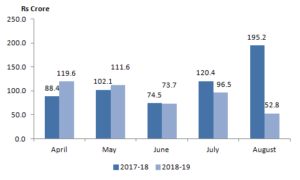 Though the new-age retail investor is more informed and has higher risk appetite, the inflows will likely see further drop going further as well on account of prevailing cautious sentiment in the market. Further, as visible from the numbers over past few months, the retail investor (constituting 45% of equity mutual fund AUM) continues to be driven by sentiment rather than underlying fundamentals and long-term vision. Also, social media platforms such as WhatsApp groups has further led to impluse selling during last few weeks.

The recovery in inflows is likely to be some time away as we are dealing with multiple headwinds such as:

However, one never gets the best buying price during period of clarity! So, an investor should try to cut through the noise and concentrate on long-term fundamentals of the economy, industry and the company.