Incorporated in 1987, Ganesha Ecosphere is engaged in the business of PET (Polyethylene terephthalate) bottle recycling and manufactures  Recycled Polyester Staple Fibre (RPSF) and Recycled Polyester Spun Yarn (RPSY). The company has around 20 collections centres for PET on Pan India basis and has manufacturing facilities in Kanpur (Uttar Pradesh), Rudrapur (Uttarakhand), and Bilaspur (Uttar Pradesh). The company has cumulative capacity of 1,08,600 Tonnes per annum of RPSF and yarn. The end-user segment for company’s products is textiles (T-Shirts, body warmers etc.), functional textiles (non-woven air filter fabric, geo textiles, carpets, car upholstery) and fillings (for pillows, duvets, toys). The company currently operates at capacity utilisation of around 90% as per its latest filing. Further, the company has about 25% market share in PET recycling industry and recycles more than 4.92 billion bottles annually.

Polyethylene terephthalate (PET) provides barrier to oxygen, water, and carbon dioxide and is therefore widely used for carbonated soft drink bottles. PET is also used to make bottles for water, juice, sports drinks, beer, medicines and other wide range of food and consumer products. Therefore, the growth for the end-uder industry is leading to increase in demand and use of PET bottles. In-order to reduce the number of PET bottles ending up in landfills it is essential that all countries have robust PET recycling process in place.

The PET bottles are collected through scrap dealers who employ people to collect, segregate and sort the plastic waste. The local scrap dealers sell it to larger vendors, which act as collections centres for PET recycling players. For more details on global PET and waste recycling industry, please refer to World Bank’s What A Waste Report.

Shareholding Pattern of Ganesha Ecospehere (As of September 2018) 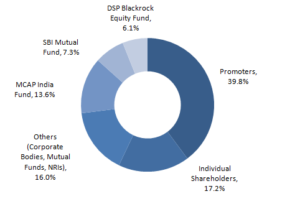 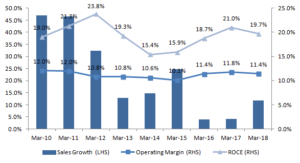 The drop in revenue growth in Fiscal 2016 and 2017 were on account of dip in realisations during the period, as company has to pass on the impact of fall in crude oil prices to consumers.

Though the raw material used by the company does not have direct linkage to crude oil, the price of end product – polyster fiber (manufactued through traditional process using crude oil linked derivatives) is linked to crude oil. Therefore, the company has to pass on impact of low crude oil prices to raw material suppliers in-order to match the prices of its competitors operating in traditional segment or compromise on its margins.

The company has therefore been able to effectively pass on the impact of low crude oil prices, as visible through its margins in fiscal 2016 and fiscal 2017. 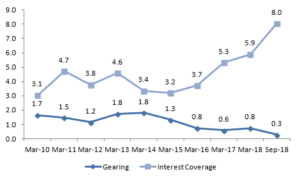 The drop in long-term borrowings will help in reducing the interest costs for the company in March 2019 to the tune of Rs 2-2.5 crore in fiscal 2019 leading to 20-25 bps increase in net profit margins. 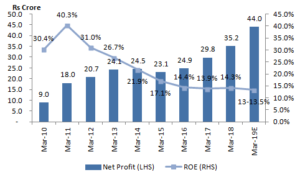 The ROE has dropped consistently for the company due to following factors:

CARE Ratings revised the company’s rating on long-term bank facilities from CARE A- to CARE A in August 2018 which was on account of successful execution of QIP issue of Rs 100 crore leading to more favourable capital structure and also due to company’s expansion plans. For more details, please refer to full credit rating report.

The Company plans to increase its installed capacity for PET Bottle Recycling by 35,000 Tons per annum (TPA) at
green field location, taking the consolidated recycling capacity to 1,43,600 TPA. The estimated investment for the same would be around Rs 250 Crore which would be funded through mix of internal accruals, debt and funds acquired through QIP.  As of September 2018, the company has around Rs 35 crore in cash and cash equivalents. Therefore, assuming the company funds a further Rs 75 crore through its CFO (cash flow from operations) in fiscal 2019 and fiscal 2020, it will still have to fund about Rs 140 crore in debt. Therefore, the company continues to be on a growth path and therefore would lead to its balance sheet being leveraged.

The demand from its end-user industry will also remain one of the major keys to company’s growth. Further, the presence and expansion plans of conglomerate like Reliance Industries may also disrupt the overall PET recycling industry.

At Rs 300 per share, the company currently is reasonably valued at 14X FY19E earnings. The company’s ability to execute the impending capex of 35,000 TPA, efficient management of capital structure, growth for domestic textile industry & demand for polyster yarn, and any change in government policy will remain key monitorables for the shareholders going forward.