The growth for the life insurance industry has been stupendous from fiscal 2014 onwards, after witnessing a slowdown during fiscal 2010 to 2014. Private sector players as well as LIC contributed significantly to the growth during the period. The buoyant performance of capital markets, rising awareness about financial products and under-penetration of life insurance in India aided the performance for the sector. 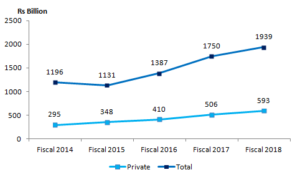 Going forward as well, the growth is likely to continue owing to under-penetration of the sector in India as compared to Asian peers as well as other developed countries. 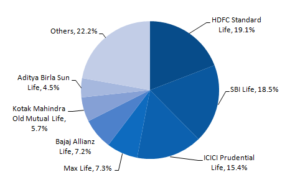 During the period of continuous growth (fiscal 2014 to 2018), the market share of top 5 and 7 private players increased continuously on NBP basis. The growth for these top players has largely been supported by the strong banca (insurance sold through bank branches) channels. Therefore, the wide distribution and cross-selling opportunity for such players aided the sale of insurance products 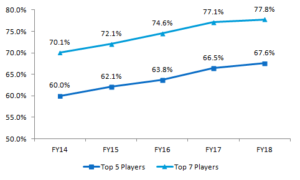 The top 5 private players in the industry have leveraged their strong bank branch network to sell insurance products. Further, selling through branch network has also aided in reducing overall operational costs for the players, as it reduced the need to setup a standalone life insurance office in all regions. Therefore, the share of premium generated through bancassurance network has increased steadily over the years, consequently leading to drop in business from individual agents 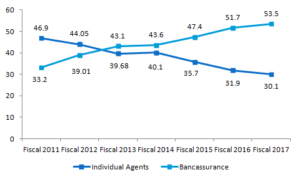 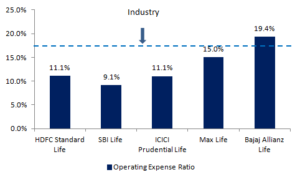 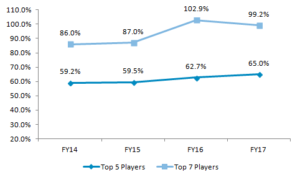 Industry likely to consolidate over next few years

After witnessing slew of new entrants in the previous decade, no player has entered the market post fiscal 2012. Edelweiss Tokio Life Insurance was the player to enter the market in fiscal 2012. Going forward, the industry is likely to consolidate over next few years, as smaller players which do not generate high share of premium through bank network will find it difficult to compete with large players on account of:

We believe that the private insurance players outside top 7 (in terms of market share) and without strong bank partners might find going difficult in long run.